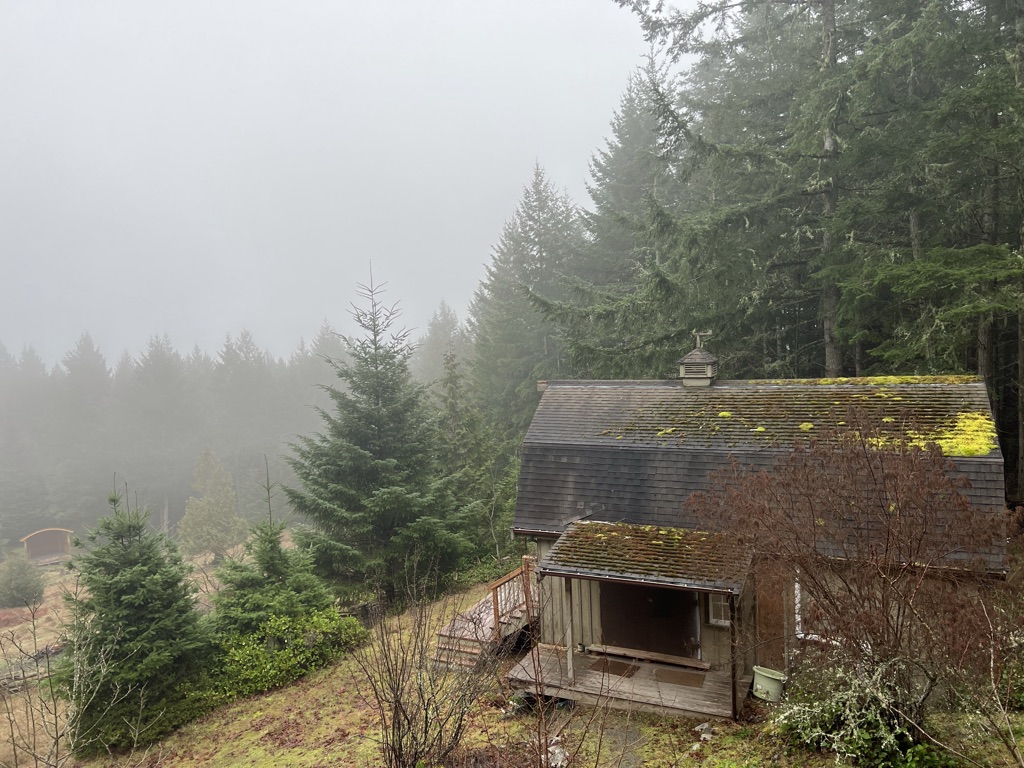 This week I’ve been out in the woods on an island at Gradient Retreat and it’s given me a chance to finally finish some research and experiments with Flatgeobuf, a new(ish) file format for storing geospatial vector data. In this post I’ll give a quick overview of the format and why I think it’s so interesting.

Flatgeobuf is a binary data format for storing spatial vector data. It’s meant as an alternative to things like Shapefiles, KML, or GeoJSON, meaning you can store the usual sort of stuff from the OGC Feature Model (lines, polygons, etc) along with related properties.

But FGB includes a few optimizations that make it especially interesting:

Flatbuffers is a binary data serialization library. Similar to projects like Apache Thrift or Protocol Buffers, it provides an IDL for specifying data schemas along with implementations for reading these data types to and from bytes in a variety of languages

Like thrift or protobuf, there’s a code generator that turns your .fbs IDL specs into concrete implementations in your chosen language, as well as a runtime library which provides some of the serialization/deserialization machinery.

As a binary format, flatbuffers already has a leg up on text-based formats like GeoJSON or WKT in terms of data compactness and serde speed: you don’t have to repeat a bunch of field names as strings in your data and you don’t have to run through a text parsing routine to deserialize. But fbs also goes a step further than thrift or protobuf in that it’s designed for “zero copy” serde.

This means that the flatbuffers spec and associated runtime libraries go to great lengths to design memory layouts that can be used directly by host languages without having to first copy into a corresponding “language native” format.

For example in a library like thrift, you might have an internal convention for representing an Array of Ints in binary. This is better than something like JSON since it’s much faster to read a custom binary Array representation than a text-based one, but you still find that in order to actually use the data you’ll need to copy to a local representation like, say, java.util.ArrayList<Integer> . So you end up with 2 steps: first buffer the thrift/pbf-encoded data into memory from disk or network, then translate this binary data into language-specific representations.

With flatbuffers, you skip the last step because the creators of the library have done binary magic to design memory layouts that can be used directly the same as other language-native datatypes. You can even read them directly from disk via mmap, etc. Of course, this tends to work best in languages like C++ or Rust which are used to giving you tight control over memory layouts, and it comes with a cost that the library can be complicated to use in comparison with thrift or protobuf (which already have their own non-trivial learning curve). But this is the price you pay to get sick sick serde speedups (you can see some related benchmarks here).

So the designers of Flatgeobuf decided to use this format for handling the encoding of feature geometries, which typically make up the bulk of a large vector dataset. As mentioned, this gives a lot of impact in particular on implementations in C++ or Rust, which is important since these versions often get integrated into other systems (e.g. using the C++ FGB implementation to add FGB handling to PostGIS or GDAL, or writing Python libraries which are just wrappers over native code implementations), so there’s a lot of leverage from this optimization.

The second exciting piece of flatgeobuf, and honestly what makes the whole thing worth the price of admission alone, is its approach to indexing. Including a pre-built index with geospatial data isn’t new — Shapefile and Geopackage support this, and there’s always spatialite if you want to pack your data into a sqlite file.

However flatgeobuf’s indexing and layout strategy is uniquely optimized for remote reading, i.e. consuming both the data and index piecemeal over the network, via HTTP requests. It targets the use case of “dump these files on S3 and read them directly from a client”.

To do this, the format combines an RTree index (the trusty workhorse of all geospatial indexing) with a compact and streamable encoding and a particular spatial ordering of the geometry data (using a Hilbert Curve) to make the whole thing more efficient. Here’s how it works.

To write an indexed FGB file, you first sort your feature data along a Hilbert Curve. Space Filling Curves are a fascinating and brain-melting topic that merit a full post on their own, but in short they allow a linear encoding of multiple dimensions into 1 dimension (in our case, sorting a 2-dimensional xy space along a 1-dimensional curve). This is an optimization used in many spatial indexing systems to ensure that data with high storage locality also has high spatial locality. 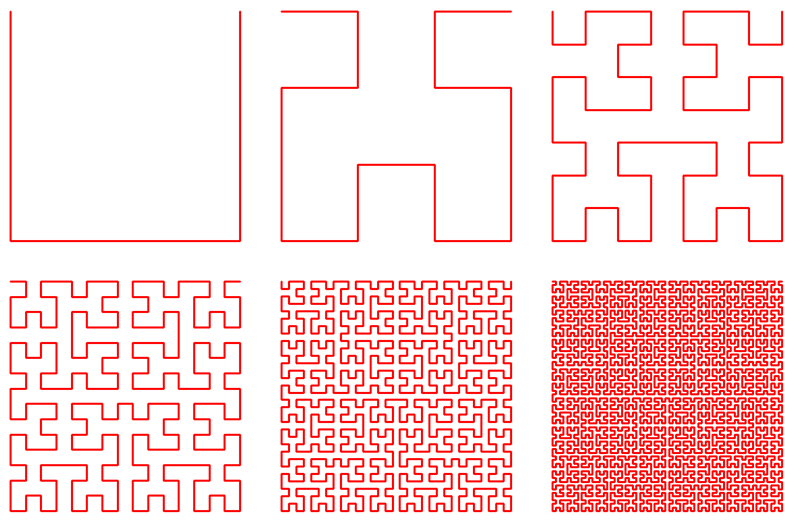 In flatgeobuf, the feature data is stored in a long buffer containing back-to-back Flatbuffers of encoded feature geometries + properties, and these features are hilbert-sorted before being indexed and written to allow for more efficient I/O batching when looking data up via the index.

Side Note: There’s a lot of research on different methodologies for spatial sorting for indexing. Flatgeobuf uses the Hilbert encoding of the center of each feature’s bounding box, referred to as “2D-C” in the literature. (https://dl.acm.org/doi/10.1145/170088.170403).

Next, a “packed” RTree is built to represent these nodes, where “packed” means that the tree is maximally filled (no empty internal slots), which is possible since we are building it in bulk from a known static dataset (FGB is not aimed at supporting updates in place).

The tree is built “bottom-up”, with the pre-sorted features making up the bottom layer. For this layer you construct a vector of Index Nodes containing a bounding box for the feature and its byte offset in the data section of the overall file.

Then a tree is built by adding upper layers of internal nodes as needed, with each internal node’s bounding box representing the superset of all its children’s bounding boxes, and its byte offset pointing to the location in the index buffer where its list of child nodes begin.

Once the tree reduces down to a single root node, it is flattened out for storage with each layer stored sequentially one after the other.

Here’s a diagram showing an example tree. Note that since the tree is fully “packed”, its structure is determined purely by the number of features and node size (branching factor). For 4 features with a node size of 2 we get this:

And here’s how that tree would be serialized into the final FGB file: 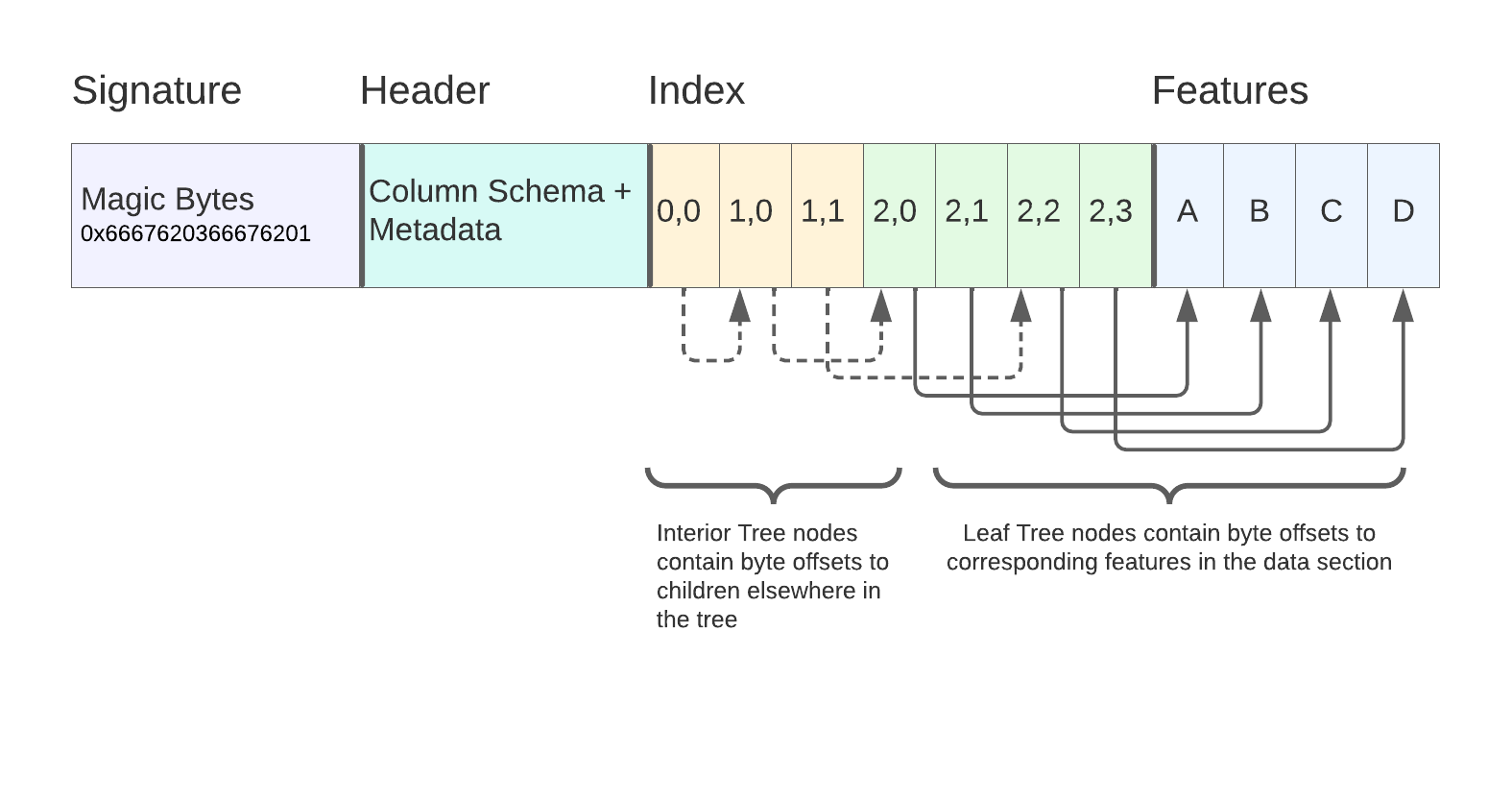 That’s a lot of detail about how the indexes are put together, but what does it actually mean?

The point is that both the index and the underlying feature data are designed to be loaded lazily — a client can stream the portions of the index they need to satisfy a bounding-box query, then use those results to stream the relevant portions of the Feature section. This can all be done either locally (reading from a potentially large file) or remotely over HTTP using Range requests.

This means you can literally chuck an FGB file on S3 and serve it directly to clients, without any persistent server process in the mix. It’s a piece of “serverless” tech which isn’t just marketing vapor-speak, and it has the potential to open a lot of new architectural patterns for managing Geospatial data.

A Map is just a Video

And formats like FGB drive that home: the way these cloud-native GIS formats incrementally pull data from remote storage is the same way that streaming video codecs lazily pull the next frames in your favorite Netflix movie. Panning around a slippy map is like scrubbing forward and backward through a video of the earth.

Here’s a demo on the flatgeobuf.org site that shows this in action: live slippy map filtering of a 12GB US Census Block dataset direct from storage over HTTP

I’m particularly hopeful about the potential to bridge the gap between offline “big data” use-cases, which want to consume static files from cloud storage, and online interactive use-cases like a simple slippy map viewer. Traditionally, the latter required an indexed server process like PostGIS, but now you might be able to have both of these systems reading from the same static cloud-storage-hosted datasets.

Where to go next?